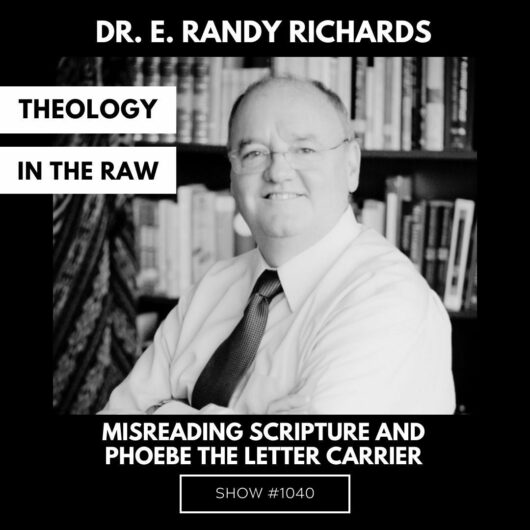 Misreading Scripture and Phoebe the Letter Carrier (and Interpreter?): Dr. E. Randy Richards Theology in the Raw
Randy is a world renowned expert on several theological and historical subjects related to the New Testament. In this conversation, we talk about misreading the Bible through western eyes (the title of one of his books) and letter writing and carrying in the ancient world as it applies to the question of Phoebe who might have carried and interpreted Paul’s lengthy letter to the Roman church (Rom 16:1-2).

Randy is the Research Professor of New Testament at Palm Beach Atlantic University, having recently stepped down from being Provost after sixteen years in administration. He has been teaching since 1986, originally at a state university and then abroad at an Indonesian seminary. Upon returning to the States, he served at two Christian universities before joining Palm Beach Atlantic University in 2006. His wife Stacia has joyfully accompanied him from jungles of Indonesia to rice fields in Arkansas to beaches in South Florida and now recently to the plains of Wisconsin. Randy has authored, co-authored or edited nearly a dozen books, from technical books on Greco-Roman papyri to popular books with over 100,000 copies sold.

Neither Complementarian Nor Egalitarian: Dr. Michelle Lee-Barnewell
Women in Leadership, part 2: 1 Timothy 2
Are We Being Discipled By Our Phones? Jay Kim
The Gospel and Empire: Dr. Warren Carter
The Gospel is Political: Dr. Patrick Schreiner
When Helping Hurts: Dr. Brian Fikkert
A Christian Response to Immigration: Karen González
Dispensationalism, LGBTQ, Priscilla and Hebrews, Revoice, Christmas Trees, Head Coverings, and More: Q & A with Preston
Racial Reconciliation as Christian Discipleship: Michelle Sanchez
You Are Not Your Own: Dr. O. Alan Noble