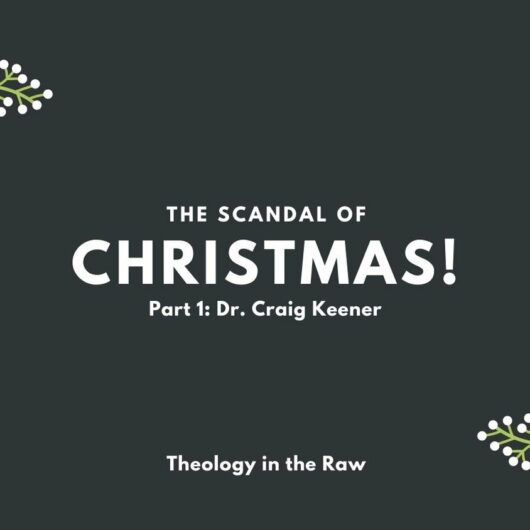 I’ve invited 4 different New Testament scholars on the podcast to talk about the Christmas story. In this opening episode, I talk with world renown NT scholar Dr. Craig Keener about Luke 1-2, the politics and sociological scandal of Christ’s birth, his earthly vocation (as a tekton…woodworker? mason? None of the above?), the location of Christ’s birth, Matthew 1-2 (and the differences between Luke and Matthew), the problem of genealogies, and much, much more.

Dr. Keener did his Ph.D. work in New Testament and Christian Origins at Duke University and is known for his work as a New Testament scholar on Bible background (commentaries on the New Testament in its early Jewish and Greco-Roman settings). Well over a million of his thirty-plus books are in circulation and have won thirteen national and international awards. His award-winning, popular-level IVP Bible Background Commentary: New Testament (now in its second edition [2014], and available in a number of languages) has sold over half a million copies.

Craig is married to Médine Moussounga Keener, who holds a Ph.D. from University of Paris 7. She was a refugee for 18 months in her nation of Congo, and together Craig and Médine work for ethnic reconciliation in the U.S. and Africa. Craig is ordained by the National Baptist Convention, an African-American denomination, and for roughly a decade was one of the associate ministers at Enon Tabernacle Baptist Church in Philadelphia. Craig and Médine’s story together is Impossible Love: The True Story of an African Civil War, Miracles, and Hope Against All Odds (Chosen Books, 2016).

Theology in the Raw Conference – Exiles in Babylon
At the Theology in the Raw conference, we will be challenged to think like exiles about race, sexuality, gender, critical race theory, hell, transgender identities, climate change, creation care, American politics, and what it means to love your democratic or republican neighbor as yourself. Different views will be presented. No question is off limits. No political party will be praised. Everyone will be challenged to think. And Jesus will be upheld as supreme.

#1012 – Paul, Gender, and the Women in Leadership Debate: Dr. Cynthia Long Westfall
#1011 – Sexuality and the Gospel: Jackie Hill Perry
#1010 – How to Deal with How You Feel: Dr. James Merritt
#1009 – The Theory of Racelessness: Dr. Sheena Mason
SPECIAL BONUS: The Pour Over Podcast
#1008 – A Raw Conversation with America’s Pastor: Max Lucado
#1007 – Should Non-Pastors and Teachers Learn Greek and Hebrew? Ryan Martin and Courtney Trotter
#1006 – Micro Churches and the Tampa Underground: Jeremy Stephens
#1005 – Transwomen in Sports, Parenting Adult Children, Head Pastors vs. Plurality of Elders, and More: Q & A podcast with Preston Sprinkle
#1004 – The Coddling of the American Mind: Greg Lukianoff